Let's describe what Phoenix is because it can often be confusing to visitors, residents and those considering moving to the Phoenix area. The actual City of Phoenix has defined 'city proper borders' and its population in 2017 was 1,626,000. The Greater Phoenix Metropolitan area, known as "The Valley of the Sun" not only includes the City of Phoenix but its suburban sister-cities and towns as well eg. Scottsdale, Chandler, Tempe, Gilbert, Peoria, Goodyear, Fountain Hills, Mesa, etc.

Because the Metro Phoenix area has grown so briskly, today it is difficult to even know when you are leaving one city and entering another. These cities and towns have merged geographically to form one thriving metropolis that is around 4.8 million people.

The city limits within City of Phoenix boundaries is comprised of 15 urban villages. These villages are large communities that belong to Phoenix and are not separate towns. The Urban Villages include Ahwatukee Foothills, Alhambra, Camelback East, Central City, Deer Valley, Desert View, Encanto, Estrella, Laveen, Maryvale, Rio Vista, North Gateway, North Mountain, Paradise Valley, and South Mountain. An Urban Village is simply an area of the City of Phoenix that has its own Village Planning Committee which makes recommendations to the City Council on each area's progress and needs. 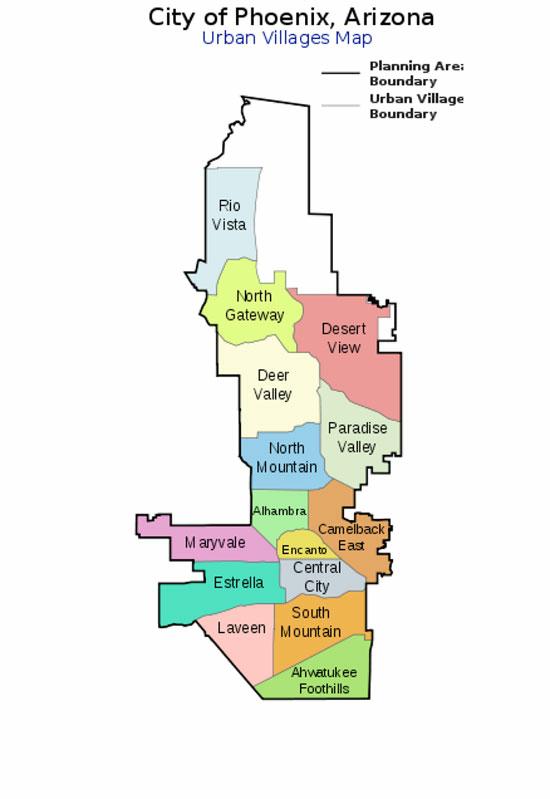